Today, more than any other time in history, women’s issues are being diligently discussed in the political, educational, medical, and even religious arenas that govern societies and cultures. From the courts of India to the schools of Afghanistan, from U.S. payroll offices to pulpits around the world, those who contend for humanitarian support, civil rights, and true biblical doctrine are rising up for truth and justice on the behalf of women. But most importantly, God is rising up on behalf of justice and truth.

The cultural shakings we have been seeing, including in the realm of gender identity, is a divine wake up call for men and women to know who they are as God’s likeness on earth and to esteem the gift of God in themselves and in one other with dignity. This is no less than a call to rise as spiritual fathers and mothers and be wise instructors of truth for the wholeness of mankind.

God is now removing false structures of how a woman’s identity has been viewed. We are about to see a revival of how both men and women understand their true identity in the likeness of God and His original intent from creation, and that it is fully restored in Christ. While the enemy is waging a war to further corrupt gender identity, a revival of true identity is on the horizon.

God’s move with women is happening at a critical time in the earth, as the gifts of God within all believers must be activated in this third great awakening. Both men and women, filled with the Holy Spirit are important for fulfilling our God-given assignment as co-laborers with Christ. Both men and women are anointed to display Christ’s works in the earth.

At creation, God laced His image into the man and the woman. He fashioned the woman as a face to face counterpart to the man. She was not under his feet or over his head, but face to face and from his side. God gave her authority and leadership just as the man was given, and the blessing to be fruitful, multiply and have dominion.

In my book, The Empowered Woman: Restoring Women to their true identity, I delve into the beautiful details of the 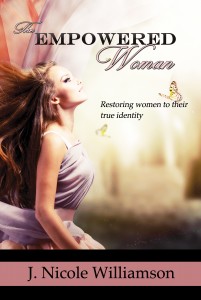 Hebrew language that portray the woman’s qualities as a strong leader, an intuitive visionary, and a weapon of God for cutting off the works of the enemy. It shows her as a communicator and completer of divine purpose. No wonder Satan targeted her, and in so doing, he also impacted the man through the very strength of influence that God had put within her.

This picture of the woman at creation is nothing less than a spiritual portrait of who God calls the Church to be as the Bride of Christ. The true Church – those who are born of the Spirit of God and who have forsaken the love of the world for the love of Christ – should be the most influential governing body in the earth. After all, the very term Church is the Greek word Ekklesia, or governing body.

God’s raising up of women is part of the rising up of Christ’s Bride (made of men and women, young and old) for end-time ministry and Christ’s soon return. The Father is calling us to embrace His blessings in Christ as we don the royal robe of redemption so that the whole Body can mature to full stature for bringing in the global harvest and healing of nations.

Through the centuries, the Church has too often let world culture and man-made traditions influence who we are and be the voice of the ideas we hold. But the reality of that has been a deluding of true identity and a compromise with corruption. While the church must hold firm to biblical values and not succumb to the world’s denial of moral conscience, we must also let Genesis 3:16 (a curse paradigm) be nailed to the cross of Christ that paid our debt of sin. We must rise to newness of life through John 3:16 and let the resurrection power of Christ restore us, and our families, to God’s original design for us as men and women in a paradigm of love and honor.

We are in a moment when God is awakening His people to their identity in Him and to contend for original design and redemption that manifests as unity that glorifies God together in fruitfulness and dominion.

Teaching women to embrace a false submission to abuse and devaluation of worth as God’s will for them is to be righteously refuted and replaced with God’s values for her personal dignity as His likeness. The practice of misogyny, especially in the lives of believers (including ministry leaders!), that is expressed through pornography and immoral entertainments must be abandoned as a return to respect of the female gender. As we do, we must take up our true work with Christ to govern communities and nations – causing men and women alike to flourish the way God intends.

The earth is longing for sons who will protect and prosper the earth and women who will be the display of wisdom. Timidity, subjugation are not the display of wisdom. In Proverbs, Wisdom stands at the top of the street and calls to all who will listen. Wisdom has a voice! God wants His daughters to stand up and have a righteous voice as spiritual mothers who are released into their God-given design and destiny.

Women are important members of Christ’s body, members whose gifts are determined by God, though often denied by traditions, both religious and cultural. The Word of the Lord is continually denied in many religious places around the world simply because God is speaking through a woman’s voice. And not only is a woman’s voice denied, her very life is often taken simply because of her gender. In India and China it has been estimated that 200 million girl’s are missing from the earth – aborted or killed simply because of their gender, labeled as worthless.

The Father wants His daughters to know who they are, to rise, and shake off the dust of false identities imposed by false ideologies touted by demonically inspired thinking. The very concept of a suppressed or abused woman is not God’s concepts of those He fashioned in His image. Shame is not the woman’s name.

It’s time for women to know who they are in Christ, to humbly rise to their call, be courageous and discerning, and celebrate their affirmation in God as vessels fashioned for a holy assignment. In Father’s eyes, grace is their crown and truth is their scepter. The world is longing for the rise of both the sons and daughters of God for such a time as this.