Is Your Struggle Leading to a New Identity? 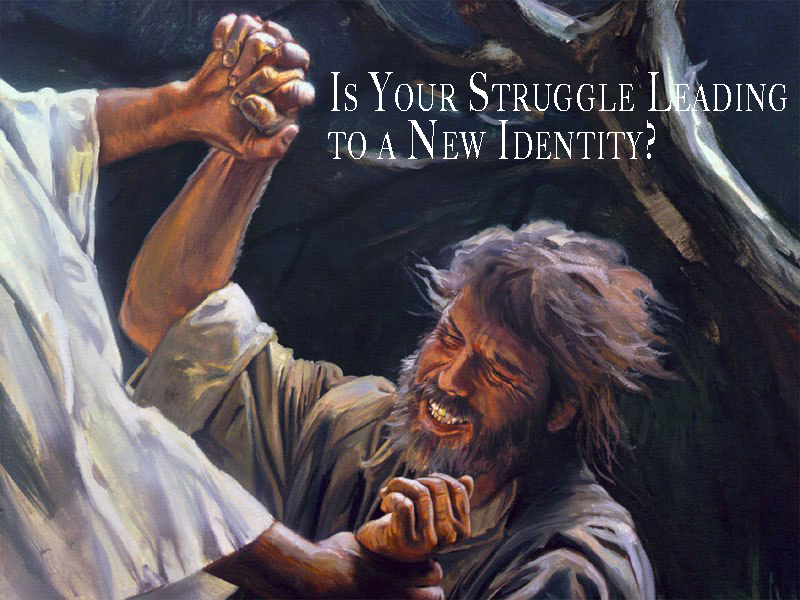 In life we struggle and wrestle with a lot of things – relationships, personal issues, health, finances, and so much more. To wrestle means to grapple with an opponent in an effort to defeat him by throwing him to the ground. Times of wrestling are times of contending and struggling for a desired victory…sometimes even for survival.

Struggles that include an intense wrestling will always work a change in us, one way or another. We may pass through moments of great discouragement, feeling hopeless, or extreme weariness, but it is our frame of mind towards our opponent that helps define who we become on the other side of it.

In Genesis 32, Abraham’s grandson, Jacob, returned to Israel from having served his uncle Laban for twenty years in Padan-Aram. Jacob fled to Laban in fear of his brother Esau after having stolen Esau’s blessing. Jacob (which means deceiver) had lived up to his name, always looking out for his own self-interests.

Now, just before the feared reunion with his brother, Jacob had a nighttime encounter with God. It wasn’t the sweet, glory meeting we all look for; rather, it was an intense wrestling all night with the Angel of the Lord. As dawn appeared, the Angel touched Jacob’s thigh and changed his walk forever. Not only that, but in that moment of wrestling, God changed Jacob’s name to Israel, which means prince of God. Jacob came out of that struggle with a new identity – one infused with God’s name and nature. That new nature was key to the identity of the nation that would come from Jacob (Israel) and their key role in the purposes of God in the earth.

Right now, the entire world is in a struggle. So too, the body of Christ is wrestling with her own identity as a people in covenant with God. Many are confused, disheartened at circumstances, and fearful. Like Jacob, we must have an attitude that will grab hold of God and allow Him to touch us, and change how we think, move, and function as His covenant family.

We must see that in this hour, in the midst of darkness, God has shown up with the intent of imparting a fresh infusion of His own nature that will change us from fearful, self-serving, and deception, into a new identity as Yahweh’s royal sons and daughters in the earth – His prevailing ones.

The Lord wants to comfort us in every place of need with strong hope and a faith in Him – not in man or systems, but in Him. He wants to transform our feebleness to be a mighty company of holy ones who stand firm, deeply rooted in the Father’s love, amidst the battles we face.

So whatever you are going through, the Lord is calling you to be courageous and believe His Word. He is still saying, “I know the plans I have for you,” says the Lord, “plans for good and not for evil to give you a future and a hope” (Jer. 29:11). He has not changed His mind about you, or America!

Fear not, stand still, and see the salvation of the Lord. Believe in Him. Have Faith in God.